#JaneAustenJuly is hosted by Katie from Books and Things and Marissa from Blatantly Bookish — If you’re interested in watching some YouTube videos about Jane Austen, then check out their channels!! They have so many wonderful videos up for #JaneAustenJuly.

One of the things that fascinated me most when I first started learning more about Jane Austen is the fact that we know so little about what she actually looked like. Indeed, what we take for granted about her appearance from several versions of her portraits is, in fact, the product of a concerted effort on the part of her family to prettify a writer by prettifying her portrait. What you think Jane Austen looked like based on the portraits you’ve seen of her is likely not what she actually looked like.

There are exactly 2 authenticated portraits of Jane Austen that we are sure actually depict her; both of these portraits were drawn by her sister and lifelong companion Cassandra.

The first portrait is a watercolor which, unfortunately for us, doesn’t actually show Jane Austen’s face, so it can’t really tell us much about what she looked like.

“This frank sketch by her sister and closest confidante Cassandra is the only reasonably certain portrait from life to show Austen’s face. It is the basis for a late nineteenth-century engraving, commissioned by Austen’s nephew, which is reproduced on the ten pound bank note.” —National Portrait Gallery

This the only authenticated portrait of Jane Austen that features her face. That’s it. If you see any portraits of her that aren’t these two aforementioned portraits by Cassandra, then they haven’t been authenticated, so we can’t be 100% certain that they were of Jane Austen. So when I say that there’s a dearth of information as to what Jane Austen actually looked like, I really mean it.

Regardless, considering how small it actually is–4½ by 3⅛ inches–there is a wealth of information to be gleaned from this sketch. In the introduction of Searching for Jane Austen, Emily Auerbach explores how Austen has been prettified and whitewashed through her portraits so as to conform to the view that she was only “dear Aunt Jane,” a harmless, trifling woman who didn’t bother anyone and who just so happened to write good stories (understatement of the century). Auerbach writes,

“Cassandra Austen’s . . .  sketch shows a young woman with penetrating eyes, a small unsmiling mouth, simple clothes, and tightly folded arms. She sits stiffly on a plain chair and seems to be looking at the world with a sharp, uncompromising gaze. Brian Southam describes this portrait as ‘a face sharp and watchful, with large unmelting eyes and pursed lips,’ and Park Honan notes Austen’s ‘defiant, sightly aloof expression’ as the eyes ‘look calmly and with a certain sparkle at an upward angle at the world.'”

“Defiant,” “aloof,” “sharp,” “uncompromising”–none of this will do for the Victorians, as we will now see.

So then from that first portrait with its “sharp, uncompromising gaze,” we get these two portraits, commissioned by Austen’s nephew, James Edward Austen-Leigh, for the publication of his biography of Austen, A Memoir of Jane Austen. The difference between the original sketch and these two portraits cannot go unnoticed. As Auerbach writes, the 1869 portrait

“presents an Austen with a fuller mouth, her lips slightly upturned as if she is almost smiling. Her eyes are made softer, more doe-like, and her gaze has been lowered. Her face is rounder, neck longer, figure less sturdy, and hair less wispy . . . As Helen Denman notes in her study of the portrait, ‘It is a charming watercolor, but it is Cassandra’s impression beautified for Victorian eyes and Victorian sensibilities, a pious imaginary delineation of ‘dear Aunt Jane.'”

“The response of family members to this doctored-up portrait suggests we no longer are looking at Jane Austen.”

“There is enormous energy and life in that face,” she says of the [original] Cassandra sketch. “What the family wanted from the professional who made the 1869 portrait … [was] a portrait that the public would find acceptable, and they knew that Cassandra’s sketch was not acceptable for the public.”

There it is: James Edward Austen-Leigh wanted a portrait that “the public would find acceptable,” and what that entailed was a version of Austen that was much more palatable–softer, without thorns.

From these engravings, we also get the version of Austen that is on the 10-pound note, a version that is now twice removed from the original sketch of Cassandra’s.

From there, things only get worse, especially with this dismal colorized version of the 1869 engraving of Austen.

How did we stray so far from the original sketch? This portrait in particular is so far removed from the original that it is almost unrecognizable as Austen. Gone is the woman who is “sharp,” “defiant,” and “aloof,” with her crossed arms. Instead we have this.

The progression of Austen’s portraits is clear. As Auerbach writes,

“Austen’s waist (emphasized by a sash) shrinks, her shoulders become more petite, her arms open up into a more casual pose, and her finger boasts a wedding ring.“

oh my god THE WEDDING RING?!?!?!?! I have copies of Austen’s books that have this portrait and I’ve never even thought to doubt whether it was actually Austen or not. And I certainly would never have noticed the presence of that wedding ring, which is so absolutely absurd given the very well-known fact that Austen was never married.

Since these portraits are contested I won’t dwell on them for too long. There is a lot of research that has gone into investigating whether they are, in fact, of Jane Austen or not, and frankly I’m not well-versed enough in that research to say which side of the argument I fall on–whether in favour of these portraits or not. Regardless, it’s interesting to see what scholars have found, and how desperate we are to ascertain what Austen really looked like. 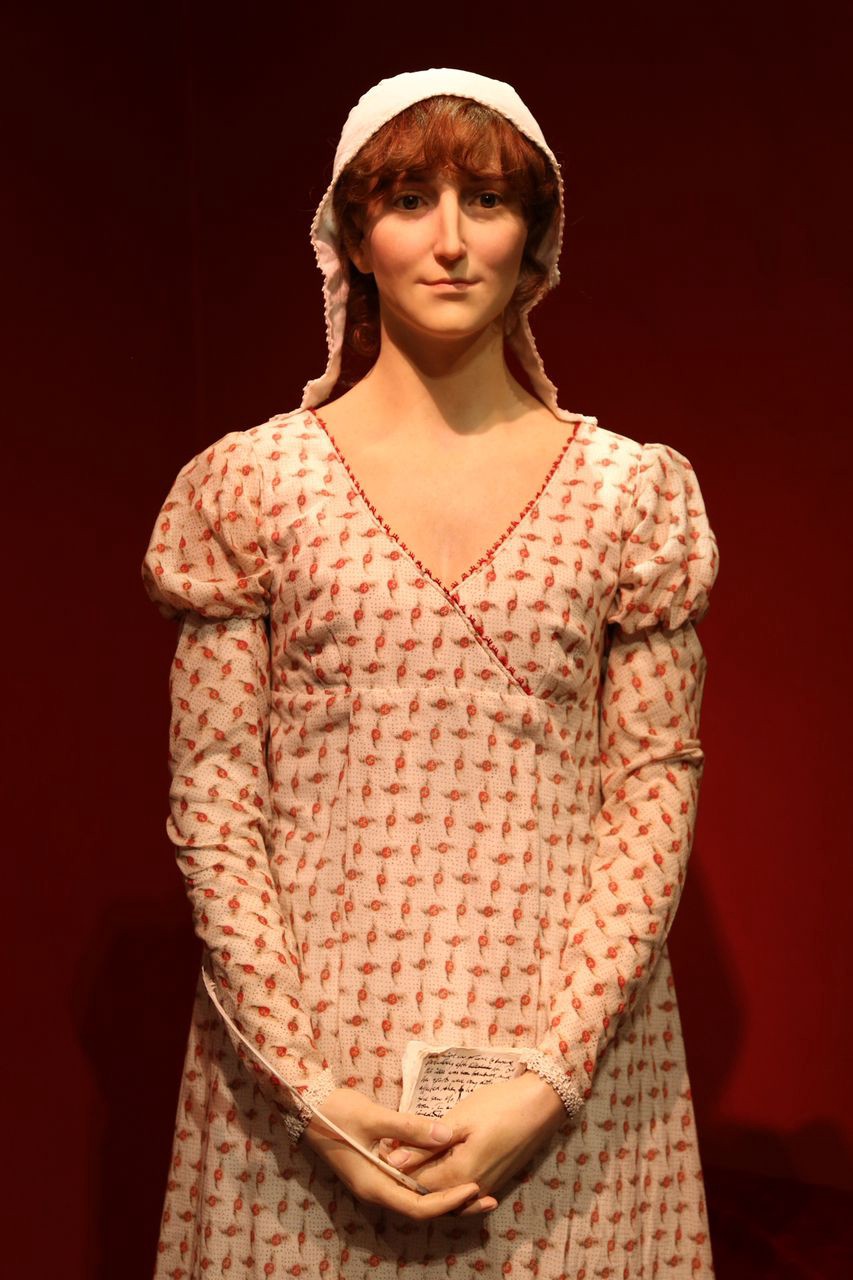 Drawing on forensic techniques and eyewitness accounts, The Jane Austen Centre unveiled a wax figure of Jane Austen in 2014. (It took 3 years to make [!!!!!!] – you can watch it get made in this video.)

The history of Jane Austen’s portraits lays bare the ways in which a portrait is never just a portrait. Parties have vested interests in saying something through portraits, often at the expense of fidelity to the life of the subject of said portraits. And if you’ve read any work of Austen’s–or better yet, her letters–then you definitely know that Austen was not an angelic figure who never uttered a sharp word. This is the crux of Auerbach’s argument in Searching for Jane Austen, and it’s certainly a reminder that Austen’s legacy has not been simply transmitted from one generation to the next, but actively shaped, poked and prodded so as to conform to the norms of the time.

But there is so much scholarly work on Austen out there, and luckily many excellent scholars are now exploring the ways in which Austen was not the “dear Aunt Jane” that she was made out to be.

5 thoughts on “WHAT DID JANE AUSTEN LOOK LIKE? (#janeaustenjuly)”